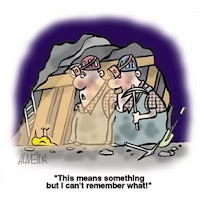 Where is the recovery?

Notices of Default and Foreclosures in Sonoma are showing no signs of slowing. And we have an impressive increase in foreclosures, with 52 more in September than August. The NODs also score a high for 2010.

There are no records of a $700K+ sale of this house. And you know what that means... livin' High on the HELOC. I would love to see the details on this because it's hard to believe they hit the home ATM for $544K!!!


2010-09-17: Foreclosed OC Townhome Mistakenly Sold Twice
SAN CLEMENTE -- A paperwork mix-up is being blamed for a real estate snafu that resulted in one townhome being legally sold to 2 separate parties.

It all started in March when Douglas Garhartt and Brandon Lively closed escrow on a foreclosed townhome in San Clemente.

A Gift From Jim Sinclair - Part 2

In December of 2008, Jim Sinclair offered a Gift to all CIGAs. I posted that here: Part 1. What fascinated me at the time was that he was willing to make such a bold prediction about the price of gold, well in advance. Since that time, Gold has risen about $370/oz (price chart at bottom), and I am very pleased with my accumulation. Faced with skepticism and scorn, I'm sure, Jim responded today with his absolute belief in what lies ahead for Gold.

I am not a gold bug. What I am is someone that is averse to risk. The risk I detected several years ago was in the very thing that was supposed to be our store of "wealth"... the US Dollar. The only question I'm asking myself right now is, "How much more?"

Now that expectations for Gold at very significant prices are being offered by various rational sources, there is one thing you can be sure of. That one thing is $1650.

I am getting many emails asking how it is possible for the gold price to reach $1650 by early January.

I suspect these are far out in time, out of the money call option buyers that have done exactly what I have warned against. That is the using of options with an investment outlook.

Options are speculations that you never hold past the half way to expiry point, but instead switch to further out months if you believe in what you are doing.

Those that pre-offer gold cannot trade it at $1650 in January because of the short time versus the big moves. They clearly have never experienced the gold run in late 1979 and early 1980.

I will stand with what I have said for nearly 10 years. Gold will trade at $1650 on or before January 14th, 2011. That never made me want to buy expensive in time call options.

It has given me the courage to invest in gold without margin both in shares and bullion.

There is no doubt in my mind that $1650 will occur in early 2011. I have told you that Martin Armstrong, a master timer, feels that gold will trade higher and face a reaction in middle to late June of 2011.

Do you have any idea how much money has been made by those that bought gold modestly and in cash only on every reaction and sold into the rhino horns? It sounded stupid when I suggested this tactic for the wannabe traders.

I ran 22,000 long gold contracts in the New York and London markets in 1978 to 1980. Back then that was a big number. Today if I have a conviction, I simply play with everything I have and screw credit. The only credit I would use as a pro trader is options.

Those of you who follow me closely know that I am NOT kidding. This is the time when PRICE and TIME meet each other.

This is the time now as it was in 1979 that I went throttle to floor.

This is the time now as it was in 1979 that I am committing 100% of all the cash I can accumulate to what I believe in.

This is the time when all I have planned for is falling into place for the final and enormous pay day. However, I will not and you should not violate discipline, as I have always tried to teach you.

Option are never held past 50% of time left when you purchased them.

As far as being long and wrong, that is something I definitely am not.

What is really interesting about these stories is that these women are willing to air their dirty and stupid laundry for the whole world to see. Yes, Ms. Tidwell, more cleavage and your boyfriend will pay off your debt. Someone needs to teach her about Return on Investment.

2010-09-03: How Debt Can Destroy a Budding Relationship
Nobody likes unpleasant surprises, but when Allison Brooke Eastman’s fiancé found out four months ago just how high her student loan debt was, he had a particularly strong reaction: he broke off the engagement within three days.
...
But as the couple got closer to their wedding day, she took out all the paperwork and it became clear that her total debt was actually about $170,000. “He accused me of lying,” said Ms. Eastman, 31, a San Francisco X-ray technician and part-time photographer who had run up much of the balance studying for a bachelor’s degree in photography. “But if I was lying, I was lying to myself, not to him. I didn’t really want to know the full amount.”
...
These were the questions that weighed on Kerrie Tidwell. A third-year student at the Medical College of Georgia and an aspiring emergency room doctor, she doesn’t worry so much about her ability to pay back her loans.

Ms. Tidwell, 26, is involved in a serious relationship with Stefan Kogler, an architect who is a native of Austria and living in Vienna. To Europeans, who often pay little or nothing toward their university studies, the idea of going deeply into debt to get educated is, well, foreign.

Ms. Tidwell feels no guilt about the $250,000 in debt she will probably run up, including some from a master’s degree program she completed in London, where she and Mr. Kogler met. “I didn’t acquire it because I go out and shop a lot,” she said. “It’s because I’m doing something that I’ll love for the rest of my life.”
Posted by Tyrone at 9:27 PM 1 comment: