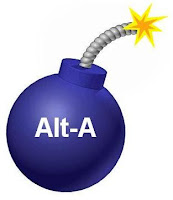 I haven't done this in a while, so lets do some detective work and poke at house debtors.

Here was the story:
2009-05-30: Alt-A Loans, Second wave of foreclosures ahead
Refinancing three years ago into a pay-option loan allowed Kristi and Marvin Laron to avert a jump in the monthly cost on the original loan the couple used to purchase their Cloverdale home. The loan’s minimum payment was $400 lower than their previous mortgage payment.

“Our whole goal was to pay less,” Kristi Laron said. “We figured we were going to refinance again. Who knew what was going to happen.”

Now the Larons are stuck with the loan and face a $1,000 hike in their monthly mortgage payment, boosting it to about $3,200. The couple can’t refinance because they owe more than the house is worth. Their lender has denied requests to change the loan and avert the payment jump, primarily because the couple has not fallen behind on payments and doesn’t have a financial hardship.

“We’re trying to avoid foreclosing on our house. We’re trying to do the right thing and nobody wants to help,” Kristi Laron said. “We both have jobs and we can’t really complain except for wondering what the future holds.”

There is a house for sale in the neighborhood for $300K. As the bomb starts going off, how many houses in this neighborhood will succumb to foreclosure? And check out the property taxes; the price of "ownership".

Was their long-term plan to continue refinancing to keep their house ponzi going?

Final Question: Who will help the Larons?
(click HERE for answer)

Posted by Tyrone at 3:33 PM No comments: 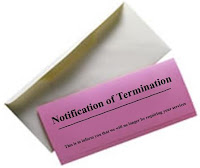 Silicon Valley: Cracks in the Foundation

No, not really, but that is the kind of ridiculous thinking that permeates the mentality of people living here.

I know someone in Santa Clara that paid $850K for a house in '05--one of those new, packed-in, little communities. They owe $750K and the Z-est is $600K; maybe it would sell for $550K today. I then searched 18 houses immediately surrounding this one; all purchased in '05 for $750K-850K. Unless they put massive dollars down, every house debtor is seriously underwater and ALL should walk away. But this is Silicon Silly Valley, it's different here. Wrong. At bottom, these boxes should be priced around $350K. Things are just starting to get interesting, but most of the debtors are in serious denial.

After the dot-com garbage and now the exploding real estate debacle, where will the next phony injection of wealth come from for Silicon Valley?

2009-05-24: Recession suddenly humbles high-tech sector
Five miles away, former indoor plant specialist Michael A. Jones is having what he calls "a humbling experience" at a nonprofit food pantry, choosing dented cans of corn and tuna, a crunched box of Rice Krispies and some soon-to-expire milk to supplement his food stamps.

Jones used to gross $12,000 a month as an indoor horticulturist for high tech companies, restaurants and car dealerships (SAY WHAT?? $12K/month for a glorified gardener?!), although not Silicon Valley Auto Group. Then "everyone cut back all at once and we had to shut down," he said. "It happened fast."
The Associated Press Economic Stress Index, a month-by-month analysis of foreclosure, bankruptcy and unemployment rates in more than 3,000 U.S. counties, shows that last year, as the national economy tanked, high tech economic centers from California's Silicon Valley to North Carolina's Research Triangle were apparently "recession-proof" with increasing jobs and stable housing prices.
Last fall, everything changed. When previously invested funds petered out, there was no new capital. Bankruptcies, foreclosures and unemployment in high tech regions spiked, and are now at some of the highest levels in the country.

For example:
-- Santa Clara County, home to Silicon Valley, saw bankruptcies soar 59 percent in the past 12 months, and projections are that they're still climbing;
"We had hoped we might stay insulated from the global economic crisis, and for a long time we were," said Silicon Valley Network president Russell Hancock. "But then it caught up with us and now everyone is laying off."
Everyone?
"There isn't anybody who isn't laying off," he said, then draws a long breath before reciting this list: "Microsoft, Intel, Hewlett Packard, Sun, Yahoo, Apple, Google." He pauses a moment to consider that. "Google. When Google is laying off you know something is going very wrong." (What's wrong is Google, itself.)

"Folks believe that because we're in the Silicon Valley with million-dollar homes and billion-dollar businesses, hunger and homelessness don't exist. But in fact it's getting much worse, and it's just really frightening," he said.
Posted by Tyrone at 6:53 PM No comments: 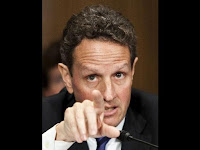 Timothy Geithner
And the taxpayer continues to pick up the tab for the mistakes, recklessness, and stupidity of others.

“Working with the Federal Reserve and the FDIC, we expect these programs to begin operating over the next six weeks,” Geithner said in testimony to the Senate Banking Committee today in Washington.

The Treasury’s Public-Private Investment Program will use $75 billion to $100 billion of government funds to finance sales of as much as $1 trillion in distressed mortgage-backed securities and other assets. The effort has two components, which the Treasury will manage in conjunction with the Fed and the Federal Deposit Insurance Corp.
Posted by Tyrone at 7:25 PM 1 comment:

Why does this group continue to be published? But if it's predicitions you want, here are 10 that are probably much more accurate than Anderson Forecast
America By 2012: 10 Dire Predictions
And follow the link for Mark Shniepp. Is this the kind of "expert" you want to follow?

The Anderson Forecast, one of the state's most followed teams of economic analysts, predicted that housing prices will start rising steadily by the second quarter of the year, starting with a rebound in the price of existing single-family homes.

“When it is generally perceived that selling values have reached a bottom, sideline buyers will enter the market and conventional home sales will dominate the real estate recovery,” UCLA economist Mark Schniepp said. “Reported selling values for homes will reverse, slowly at first, and then rise more convincingly.”

2008-03-11: Experts' forecast sees no recession
UCLA's Anderson Forecast, which previously has been ahead of the curve in forecasting the downturn of the California housing market and the resulting decline in the economy, predicted yesterday that the state and nation would not fall into a recession.

“The data don't yet add up to a recession, and there is nothing to challenge the basic story of sluggishness that we have had for two years. Don't worry, be happy,” said Edward Leamer, director of the forecast, the state's best-known economic report.

2006-05-04: County home prices to flatten
With home sales sharply declining and values hitting a plateau, economists from the UCLA 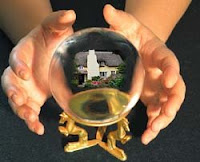 Ratcliff said no crash in prices is likely since the economy is so healthy. Generally, home prices fall only when large numbers of workers lose their jobs. [LIKE RIGHT NOW?]

“Home prices will plateau but not depreciate,” Ratcliff said. “Home prices only fall during recessions.”
Posted by Tyrone at 8:42 AM No comments:

I like lists of things. Here is one from Jim Willie...

2009-05-15: Trampled Green Shoots
What follows is a laundry list that puts the USEconomy halfway between the Intensive Care Ward and the National Morgue:

Posted by Tyrone at 9:07 PM No comments: 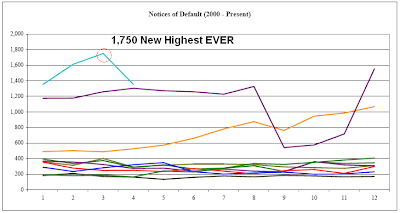 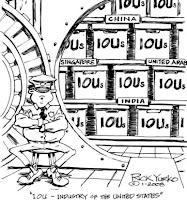 From Welcome to 2009, here is more supporting information for the downtown.

ACORN, housing.ACORN.org, ACORN Housing Services
And as the Housing Bubble enters the later stages of its destruction, a group has to insert its stupidity in hopes of saving house debtors. Fools, morons, monkeys, and jackasses... welcome, ACORN. 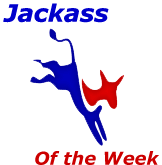 "Many of the sales that are happening now are around houses that could be saved by the (loan modification and refinance) plans starting to be implemented," said Amy Schur, California director of ACORN.
Posted by Tyrone at 8:36 PM No comments: