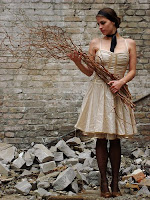 Here are my concerns/predictions going into 2009. Similar concerns led me to exit the stock market last year, and I'm trying to position myself for '09, but it's difficult to find safety.

What am I missing?

Also, I added many links to '09 predictions.

A Gift from Jim Sinclair

Ok, Jim Sinclair says write this down, so I'll note it right here. I consider the 'replacement' of the US dollar a low probability event, but it's not zero, and a lot can happen between now and June 2012. What really fascinates me is that he not only says it will happen, but that he provides a date.
Jim Sinclair's MineSet

Next year is going to be very interesting and the economy deserves close attention and scrutiny, particularly if your plan is to survive and possibly thrive as we emerge from the recession. My goal is survival and I emerged from '08 relatively unscathed, but I'd like to come out of the overall recession in better shape than when it started.

2008-12-28: A Gift From Jim
Dear Friends,
Here is my New Years gift to you, my extended family.
There is no way that the CONSEQUENCES of the largest creation of paper money since it was invented can be avoided or even modified. Odds now favor Alf Field’s price objective (Elliott Wave Gold Update 23, bonus article Crisis Cogitations).

Roy 'realrant' Merlino, Real Estate Guru
(Part I)
Back in November '07 at a Sacramento Land(ing) post, I left the following comment (see below), which drew a response from a local realtard. He believed that a median price drop of 50% for Sacramento zip code 95864 was impossible. Well, the impossible appears to be on its way. Lets start the 'realrant 50% Watch'. We're already at 40%.

And there is a lesson to be learned from this. First, you cannot trust realtors, and second, this housing bubble was far larger than most could imagine and it is not over. House prices will continue to drop in California until 2011. The toxic ARMs are starting to reset and the economy is tanking. When things reach bottom, the words used to describe the devastation will be 'shock' and 'awe'.

Tyrone said...
If that "best deal" isn't a mark-down of 30-50%, forget it; you're just a sucker, otherwise. Price-to-rent ratio has a long way to come down in Sacramento.

RealRant said...
Hey Tyrone. Re: If that "best deal" isn't a mark-down of 30-50%, forget it...So I want everyone to remember that Tyrone says that the median price in 95864 needs to be $194,000 before anyone but a sucker would buy. Hey... do I get some kind of membership card or T-shirt for the Housing Bubble Hall of Shame? What are the criteria for induction?

This is classic NAR propaganda. You can't make this stuff up; it's absolutely priceless! Are these the kind of people you want to listen to when you make 'the most important purchase of your life.' Absolutely no accountability for their false statements.

2007-04-10: Economist sees Marin holding its own in housing slump
"It's God's country, what can I say," Leslie Appleton-Young, chief economist for the California Association of Realtors, told an audience of agents Tuesday in Terra Linda. "When is the 30 percent decline in Marin County's market going to happen? Not in my lifetime." (Is she dead?)

"It's important to keep it in perspective. Do you really know anyone who thinks, 'Gee, I'm so sorry I bought in the Marin market?'"

Despite the problems in the housing sector, Appleton-Young noted that the economy is growing at a moderate pace, interest rates are relatively low and job creation has been steady in California. Also, the commercial real estate market has been "on fire," suggesting brisk job growth and investment, she said.

"It doesn't look like there's a recession coming any time soon," she said.

Yvonne Herrara, House ATM User
(Part I)
Yvonne was featured in a Whittier Daily News article* back in Feb '08. She tapped $300,000K of her home "equity" for home improvements, a pool, expenses for your kids, and who knows what else. Since then, she was foreclosed upon and had to vacate the house. I received a comment at my original post (Part I) about the recent purchase. In a nutshell, the comment stated: 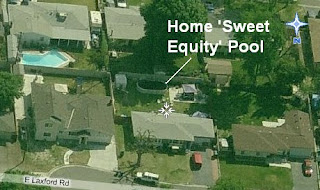 Can somebody point out the $300K pool? BWAHAHAHA

On a final note, does the bank have recourse on their debt? I believe it does. The bank could sell their debt to a collection agency for pennies on the dollar, and the collection agency could harass them forever. They could have taken a lesson from the Oropeza's; after raiding the bank's 'treasury', the Oropeza's moved to Texas, which has homestead laws that can protect them.

* The original article can no longer be found at the Whittier Daily News, not even in their archives. Very strange.

Exactly one year ago on December 16, 2007, the Ventura County Star ran a story on a young family, desperate to "own" a house at any cost. And now, what a cost it has been. The latest numbers from DataQuick show a 32% drop if median price for Ventura County, and interestingly enough the numbers are close to the numbers for this particular family's house. The original story is posted below, along with a video and the Zillow numbers. At what cost is home "ownership" worth? It's going to take a lot of coupon clipping to make up for $126,000 lost, so far. ($512K-$386K)

2007-12-16: Families finding struggle to stay in pricey state
Owning a house was a top priority for Mark and Marianne Moise. (Do you really think it was his top priority?)

Both of them were born and raised in Ventura County. They wanted to stay close to family and friends. Even with the high cost of homes in Ventura County, they wanted a house with enough space for 7-year-old Cody and 18-month-old Maddison.

"We were both worried we weren't going to be able to afford a home," Mark Moise said. "It was real discouraging looking at housing prices. Even fixer-uppers were out of our price range, but we found one."

With the loan, their monthly mortgage on the $512,000 home is $3,500 a month, $200 less than what they would have paid for a $475,000 home they looked at previously at a two-year fixed rate that would adjust upward after that period. The Moises are grateful for their fixed rate, as they watch people they know lose their homes when adjustable loan rates increase. (They would be more grateful had they WAITED for the bubble to pop. The price of ownership per day: $126,000/575 days = $219/day LOST.) 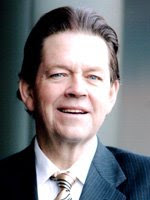 Not only does he refuse to pay the penny, he won't be sending that 'nice note' to Peter Schiff. He also says you basically cannot forecast the economy beyond 9 months into the future. Funny that I don't recall him giving this disclaimer in the first video. What a complete and total bum.

At 4:00 in the second video, Peter mentions the ARMs resetting. This is all over the news right now. I guess the mainstream media decided to inform the sheeple, although the MSM and the sheeple can't seem to look forward more than a month ahead, which makes Laffer's forecasting (9 months) look pretty good compared to morons.

2006 Prediction:
"I would suggest on the new-home side that we haven't reached the bottom point yet, and I'm optimistic we will in 2007. ... I think next year is going to be very similar to this year. I don't necessarily think it's going to go down a whole lot more. I think new-home sales are going to be relatively the same as this year."

"I think sales on the new-home side are going to be pretty consistent with this year. I think we'll see a little bit of a bump in '08 in terms of sales volume. In terms of pricing we may see a consistent level. Maybe a little lower next year, not significantly by any means. And then maybe net pricing is a little bit up."
2007 Prediction:
Paquin believes the average price of a new home – $404,689 this year – will fall to $374,337 next year. His good news: Builders will find a bottom in 2008. "

With the spring sales season of 2009, you will start to see some positive movement in sales rates," he told a gathering of the North State Building Industry Association.

2008 Prediction: Real estate expert predicts '09 bottom
Question: It's been the slowest year yet for home builders. When do you anticipate that the market will hit bottom?

Answer [Gregory Paquin, president, Gregory Group]: It is our expectation that the Central Valley will hit bottom during 2009 and begin to see the signs of recovery in 2010 and 2011, although some areas - Sacramento and some northern Central Valley communities - may experience the recovery sooner than others (some mid- and southern Central Valley communities). Several things will need to happen before the housing recovery can begin: a slowing of foreclosure activity, less fear about job losses, the stabilizing of the overall economy and the easing of credit markets - a swing of the pendulum back to the center.

And then this gem...
2007-04-01: Mortgage defaults on the rise, but what's next?
Gregory Paquin, president of the Gregory Group, a real-estate information and consulting service in Folsom, said he doesn't anticipate a housing-market bubble because regional employment numbers are strong enough. "But clearly there are issues with sub-prime."
Posted by Tyrone at 8:11 PM 1 comment: 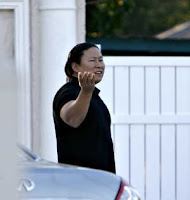 And a 'Fraud Expert' stated that 'it was obvious the banks weren't paying attention'. Ya' think? Too bad they couldn't, or wouldn't, put a stop to this when it was 'obviously' taking place. They could have read some of the housing bubble blogs if they needed help.

"What we had here was an obvious case of mortgage fraud," said Josh Parker, a Coldwell Banker Realtor.

Most of the homes Sang-Min Kim sold are empty now. Many have code violations, and are clustered in impoverished neighborhoods such as Belmont Heights and Sulphur Springs.

The loans — many made by banks now getting billions in a taxpayer bailout — dwarfed the true value of the properties. Some borrowers had no prospects to suggest they could pay off the loans. Multiple loans from the same bank branch sometimes went to a questionable borrower within weeks of each other.